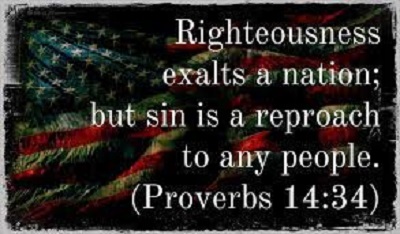 Receiving the due penalty of our sin

The red wave fizzled – despite universal projections from conservatives and liberals; despite soaring fuel prices, skyrocketing inflation, and plummeting approval ratings for Joe Biden; despite the historical precedence that the party in power typically suffers large midterm loses.

Pundits will try to dissect why the tsunami never materialized.  Was it due to voter fraud or the biased media shilling for the Democratic Party?  Or perhaps the imbalance of advertising as leftist groups poured millions and millions of dollars into ad campaigns to mislead voters regarding candidates and ballot proposals?  Was it apathy among conservatives compared to younger voters steeped in leftist ideology?

Yet what few will consider is that the result of last night’s election is evidence of God’s judgment on our nation, removing His hand of blessing and allowing, as it says in Romans 1, “the due penalty” of our sin.

For nearly 50 years Americans and Christians could blame the death of tens of millions of babies on Supreme Court justices who imposed a “right” to abortion upon our land, ignoring the will of the people at that time.  Now with the overturning of Roe v. Wade, we have a say regarding whether our nation will protect the most vulnerable or continue to sacrifice them on the altar of convenience.

Yesterday, the vast majority of the nation voted for a party that campaigned feverishly for the right to continue to butcher the unborn.  In addition, abortion was directly on the ballot in five states.  Three states – my home state of Michigan, as well as Vermont and California – voted on proposals to enshrine in their state constitutions an unlimited right to abortion, up until the moment of birth.  They all passed overwhelmingly.  Two other states – Republican-led Kentucky and Montana – struck down ballot initiatives seeking to restrict abortion.

Kentuckians voted against amending the state constitution to clarify there is no right to abortion or a requirement for the government to fund the practice. The initiative failed by a 52-47% margin.  Montana’s voters rejected a ballot measure codifying into state law federal protections for infants born after a botched abortion. The initiative would have defined an infant at any gestational age as a legal person.

Here in Michigan, the vote wasn’t even close; Proposal 3 passed by over 12 percentage points, with nearly 2.5 million people voting to make Michigan one of the most pro-abortion states in the nation.  Exactly 50 years ago in 1972 – just months before the Roe V. Wade decision – Michigan voters at that time also faced a ballot proposal that would have legalized abortion in the state.  In 1972, Michiganders overwhelmingly rejected that proposal, voting to protect the unborn.  Fifty years and a generation later Michigan voters clamored for the right to kill babies, unlike their predecessors who voted to protect them.  It’s a reminder of the book of Judges – “… And there arose another generation after them who did not know the Lord or the work that he had done …” and “everyone did what was right in his own eyes.”

Yet the blames rests also upon an apathetic church which professes the name of Christ, but is silent in the face of the slaughter of babies.  One Michigan GOP County chair wrote:  The Catholic Church led the way putting to absolute shame the many other denominations over the state that sat on their hands about it. We bought radio ads, local paper ads and sent out tons of flyers. But we were overwhelmed by the millions of dollars that flooded our state from NY, CA, and other epicenters of evil that bought shiny lying deceptive ads that ran non-stop on every media outlet out there. It speaks to the power of money and the dullness of citizens who believed their lies without investigating it. Where are OUR millionaires??? … Our state GOP totally betrayed us by REFUSING to help. We were totally alone in this fight and had only our grassroots pennies against the Dark millions. Yes, we had God on our side, but He allowed this to pass. Why? The refusal of our pastors to teach their people of their responsibilities as biblical citizenship? Their attitude that ‘God is in control’ and all we have to do is pray (without lifting a finger on our part)? … I feel like the prophet Jeremiah weeping over my state.

Why did God allow these abortion proposals to pass and a party of death to prevail?  Just as there is a physical cause and effect, God makes it clear in His Word that there is a spiritual cause and effect.  “Righteousness exalts a nation, but sin is a reproach to any people.”  (Proverbs 24:34)

“See, I have set before you today life and good, death and evil. If you obey the commandments of the Lord your God that I command you today, by loving the Lord your God, by walking in his ways, and by keeping his commandments and his statutes and his rules, then you shall live and multiply, and the Lord your God will bless you in the land that you are entering to take possession of it. But if your heart turns away, and you will not hear, but are drawn away to worship other gods and serve them, I declare to you today, that you shall surely perish. You shall not live long in the land that you are going over the Jordan to enter and possess. I call heaven and earth to witness against you today, that I have set before you life and death, blessing and curse. Therefore choose life, that you and your offspring may live, loving the Lord your God, obeying his voice and holding fast to him, for he is your life and length of days …” Deuteronomy 30:15-20

Our nation has chosen sin over righteousness, death over life, and evil over good.

As Chris Hohnholz wrote on Twitter: “We are a culture under the curse of Romans 1.  God continues to give a Christ-rejecting nation over to a debased mind.  Our country drinks up depravity like water.  Therefore, what should seem like obvious reasons to reject such leaders in turn is the very reason they are voted for by unregenerate and sinful people.”

Yet for the true Church, our task remains the same. As Christians, we are to do justice, love mercy, and walk humbly with God.  We are to pursue holiness.  We’re to defend the defenseless and be salt and light in an ever-darkening world.  We are to proclaim Christ to the lost and hurting.  Our calling doesn’t depend on who governs our state or nation.  Our hope is not in government, but in the God who sovereignly rules over the affairs of men.