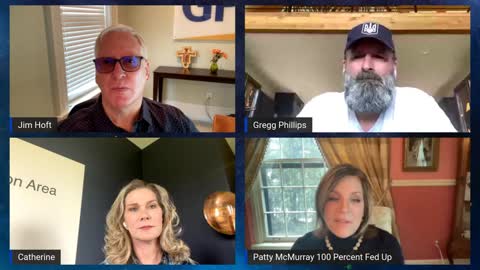 Don’t miss this very informative interview from The Gateway Pundit with Catherine Engelbrecht and Greg Phillips, two of America’s strong and faithful patriots. Click here to watch 46 informative minutes that will shed light on how true patriots are treated for doing the right thing, the political (non-religious) persecution we are facing and will likely face, what’s been happening in regards to the 2022 election both in Michigan and around the country, the importance of intelligence gathering and the difference between intelligence and evidence. One can tell by this list that a whole lot is packed into 46 minutes!

These two leaders of Texas-based True the Vote were finally released after spending almost a week in jail. Their crime? They refused to give up the name of a “confidential FBI informant” in a civil case. This is so unheard of that the marshals weren’t even sure how to charge them. Hear first-hand how they were treated in jail, the facts surrounding this case, and how other patriots unswervingly gave them support during this time of crisis.

This all took place just before midterms. Is the timing coincidental? You’ll have to decide for yourself.

Hear this dire warning given by Greg regarding Konnech (voting machines), stating, “This isn’t software; this is malware. This is spyware; they’re sucking data from the United States and storing it in China and then using it to create a Chinese-style social credit system where we’re all scored – United States citizens are scored – for the purposes of manipulating votes, manipulating thought, and manipulating pretty much everything you can imagine in our lives.”

If you live in Michigan, a portion of this interview holds a particularly chilling observation concerning our state. Although Greg and Catherine thought that things were a little better regarding the midterms, as far as transparent and fair elections go, Patty McMurray from 100 Percent Fed Up had a differing opinion where Michigan is concerned. “I think Michigan residents are feeling pretty hopeless,” later stating that it would be pretty hard to ever win another election here again. With the proposals that have been passed, how Jocelyn Benson got away with so much, and with deep money going to candidates that aren’t on our side of freedom and fairness, it’s no surprise that Patty feels that things are not improved in this state. She also shares some interesting history of how ballots were once cast – unique to Michigan – and what took place this time. Really, you don’t want to miss this interview.

After going through such an experience there are some who would shrink back, saying, “I better keep my head down and go low key.” However, in this second interview with Epoch Times’ Joshua Philipp, Catherine says that her resolve is strengthened and that she’s “more determined now than ever,” after her jail time, to expose election fraud. She also states, regarding her experience, that the term “political prisoner” comes to mind.

While in jail Catherine was told, “You need to understand, in here, your life is not your own.” Can you imagine being told such a sobering thing when you’ve spent years working for others to have the right to be heard, to be counted, and to protect our nation’s right to fair and transparent elections?

The first interview serves as a type of training. Watch it and learn from their experience. As the saying goes, forewarned is forearmed. (You can view it here.)

Freedom has never been free. It cost our forefathers, our military through time, and countless prayer warriors, conservatives willing to stand, and activists with moral conviction and stalwartness. In thinking of Thanksgiving, when you go to prayer thank the Lord that there are those who will stand, those who defend, and ask the Lord what role He would have you to play as you fight the good fight of faith, family, and freedom! If these things are not done to the glory of God, all that we do is truly in vain. We must turn to Him.

“Except the Lord build the house, they labour in vain that build it: except the Lord keep the city, the watchman waketh but in vain.” Psalm 127:1