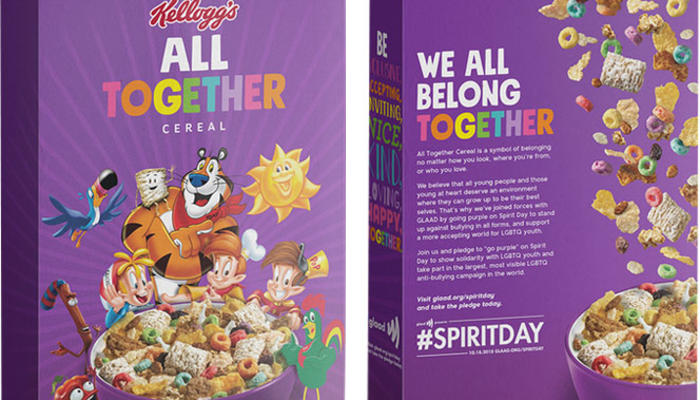 One of the latest co-conspirators is Kellogg’s. Partnering with GLAAD (Gay & Lesbian Alliance Against Defamation), Kellogg’s is releasing a new cereal called “Together With Pride,” to promote “Gay Pride Month” in June. The sugary, rainbow cereal geared toward kids, features all of the Kellogg’s cartoon figures from Tony the Tiger to Snap, Crackle, and Pop on the box, with $3 from the sale of each box going to support GLAAD. A caption on the box states: “We believe that all young people and those young at heart deserve an environment where they can grow up to be their best selves. That’s why we’ve joined forces with GLAAD … and support a more accepting world for LGBTQ youth.” Not only will the cereal rot kids teeth, it will rot their minds. Most troubling of all, Kellogg’s is pushing children to accept transgender ideology, encouraging kids to deny who God created them to be, and telling them that their gender isn’t rooted in biology, but is a personal choice. A special feature on the cereal box asks children to choose their pronouns with options like “he/him,” “she/her,” and “they/them,” which refers to being “non-binary.” Kellogg’s also offers blank spaces in case kids want to make up their own gender pronouns, because now that’s a thing in our culture which has thrown off the restraining forces of morality.

As we say in the attached take action letter, it’s appalling that Kellogg’s is promoting dangerous, transgender ideology to young children. Numerous studies have shown that the vast majority of children who experience gender confusion will ultimately accept their true biology if left to their own devices and are not pushed into a transgender identity.  In addition, many of those who pursue gender transition treatment suffer from regret, depression, and suicide.  (We highly commend the film, “In His Image” which deals with this subject.) Just recently, CBS’s “60 Minutes” aired a segment depicting individuals who, after undergoing hormone treatments and sex “reassignment” surgeries, sought to “de-transition” back to their natural sex.

Kellogg’s is playing with the lives of children when they recklessly promote such a lifestyle – all to appear “woke” and pander to LGBTQ activists.

Tell Kellogg’s to stick to selling cereal, not a radical worldview to our kids and grandkids.  Let Kellogg’s know you won’t support a company that undermines your values. Click here to send an email to Kellogg’s.

We are grateful to God that He has moved on the hearts and minds of our friends, showing us a little of what is inside them. Your notes of encouragement, prayers, and financial support mean so much to us; without them, we wouldn’t be able to do the important work that God has laid upon us.

Won’t you prayerfully seek the Lord’s will to come alongside us again, supporting us in whatever manner you feel led? Thank you.