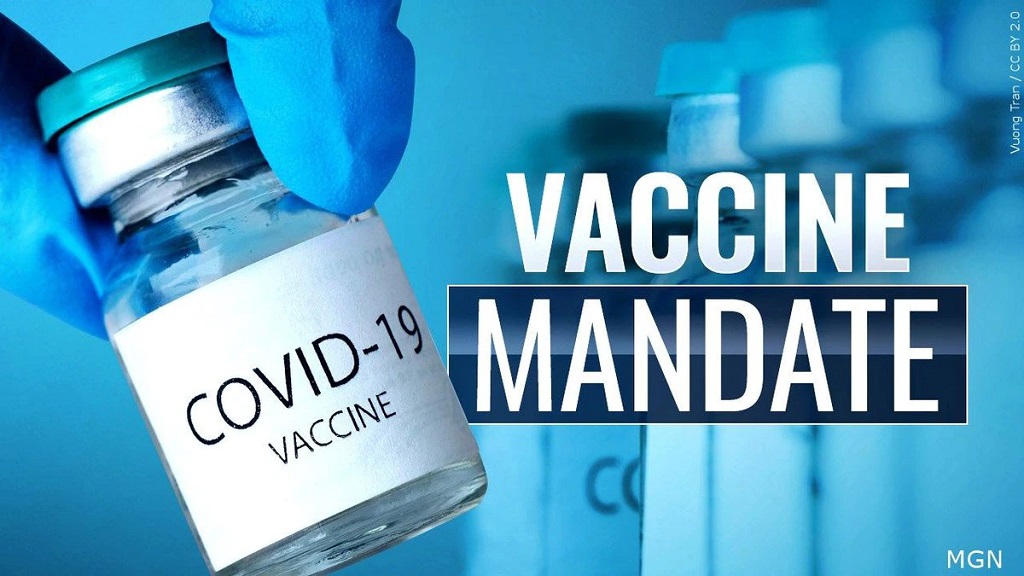 The following article comes from the current issue of our free newsletter, Frontline. Not all of our newsletter articles become email alerts; so contact us at 231-924-4050 or kimberly@americandecency.orgto sign up for Frontline. You can also view it on the web under resources at www.americandecency.org. However you choose to keep informed, let us help you do so.

On September 9, two days before the 20th anniversary of 9-11, Joe Biden stood before the American people and, in essence, declared war – not against a terrorist threat, but against one-third of the American people.  In his animosity-filled speech, which unconstitutionally mandated COVID vaccines for nearly 100 million American workers, the “great unifier” declared that those who aren’t vaccinated are the enemy. “We’re going to protect the vaccinated workers from unvaccinated co-workers,” Biden angrily decreed.

While he may see us as his mindless subjects, the American people aren’t stupid.  If the COVID vaccine protects the vaccinated from serious illness, as Biden repeatedly stated in his speech, why do the vaccinated need to be protected from the unvaccinated?  And if the vaccine doesn’t work, why should anyone take it?

Yet Biden shows more contempt for Americans who exercise the freedom to make their own health decisions, than he did toward the Taliban.  “This is not about freedom or personal choice,” Biden testily chided.  But that is exactly what it’s about!  If we don’t have the right to control what goes into our bodies, we are not free.  The Left sees individual liberty as an obstacle to their totalitarian goals.

The Biden administration claims their mandate is about public safety – that we have to give up our liberties for the greater good.  But public safety isn’t their motivation.  The hypocrisy of their mandates exposes that lie.  How many times have their “rules for thee, but not for me” been revealed, as the elite ignored the mask mandates and social-distancing they forced upon us “peons.”  This latest vaccine mandate is no different.  Look who’s exempt:  Congress members and their staff, federal court employees, and U.S. Postal workers.  And while European travelers have to be vaccinated before entering the U.S., illegal immigrants are streaming in, and as the Biden administration admits, will not be required to be vaccinated.  Yet American workers are being told if they want to feed their families, they have to take the jab.

Biden and his spokespersons have repeatedly stated that they would not implement a vaccine mandate.  Just two months ago Press Secretary Jen Psaki stated that a vaccine mandate is “not the federal government’s role.”  Yet Biden has demonstrated that he won’t let the Constitution, which he swore an oath to uphold, get in his way of implementing the Left’s agenda.  The outcry from Republicans was swift and strong against Biden’s blatantly unconstitutional mandate, as governors and attorneys general from 27 states are filing lawsuits against it.  They, along with a majority of Americans according to a Trafalgar Group poll, believe that Biden does not have the constitutional authority to force private employers to require their employees to be vaccinated. Unsurprisingly, 83.5% of Republicans oppose the mandate, but Democrats should take note that, in addition, 68.2% of Independents also oppose it.

Not only is this mandate unconstitutional, it will be devastating for our economy already struggling with a massive labor shortage and rising inflation.  Employers and hospitals who have already implemented a vaccine mandate are losing employees who won’t compromise their sincerely-held beliefs. A hospital in upstate New York has closed their maternity unit after numbers of nurses resigned due to the vaccine requirement.  What will be the impact on our nation’s healthcare as we lose valuable and experienced medical workers who served valiantly throughout the worst of the COVID pandemic before a vaccine was even available, only to see their jobs threatened if they have concerns about taking the vaccine.

Every individual should have the freedom to weigh the risks and benefits of whether or not to be vaccinated.  And while there are valid reasons for those who chose to be vaccinated, those who chose not to take the vaccine also have valid reasons for their decision.  We have always been a nation that had deep regard for the right of conscience.  That fundamental right is being stripped away.

One year ago in the run-up to the election, both Biden and Kamala Harris were themselves vocal “anti-vaxxer” skeptics as they cast doubt on the “Trump” vaccine.  Remember Harris stating in the vice-presidential debate: “If Donald Trump tells us we should take it, I’m not taking it.”  They were the ones who politicized this.  But Americans, who have credible concerns regarding the vaccine, are now condemned by the very ones who first encouraged vaccine hesitancy.

Most vaccines go through years of trials before they are approved. It’s understandable that there are people who don’t want to submit to a global clinical trial.  Remember when Pelosi said about Obamacare that we have to pass the bill to find out what’s in it?  Many share the concern that that’s what is occurring with the COVID vaccine.  No one truly know what the long-term effects will be, even as more evidence is coming out about adverse reactions.  Healthcare workers are required to file a VAERS (Vaccine Adverse Event Reporting System) report regarding adverse reactions to the vaccine, yet an undercover video from the esteemed organization Project Veritas revealed federal health workers not reporting concerning vaccine reactions, while also expressing doubt about the vaccine’s effectiveness.  But the vaccine reactions that have been reported to VAERS are alarming.  VAERS shows that there have been over 701,000 adverse COVID-19 vaccine reactions reported since December 2020.  That 701,000 figure included 14,506 deaths, 58,440 hospitalizations, and 1,757 miscarriages. (That total number of deaths associated with COVID-19 vaccines is greater than the number of deaths associated with all other vaccines combined since the year 1990.)  I’m not going to go down the same path as the fear-mongering Left which counted anyone dying with COVID as a COVID death, even if the virus didn’t cause their death; so, I will state that there isn’t conclusive evidence that all of those reported adverse reactions are a direct result of the vaccine, but there is growing scientific evidence of concerning side effects from the vaccine.

We are constantly lectured to “follow the science.”  Listed below are just some of the scientific results now coming to light regarding COVID-19 vaccine side effects.
*A British study recently reported on menstrual cycle changes in women associated with the COVID-19 vaccine.
*Study findings have shown that teenage boys face much higher heart risk from the vaccine than Covid.
*A CDC study showed increased myocarditis/heart inflammation risk, lymphadenopathy, appendicitis, and herpes zoster infection after having received the vaccine.
*An Israeli study found that the Pfizer COVID-19 vaccine was associated with a threefold increased risk of myocarditis.
*The FDA has added a new warning to Pfizer and Moderna Covid-19 vaccines about risk of heart inflammation.
*As of June of 2021, CDC said that more than 1,200 cases of heart inflammation (myocarditis) in young people had been reported after Pfizer and Moderna Covid-19 vaccinations.  Most were in males under the age of 30.  Another study found the incidences of myocarditis more than five times more common than the CDC reported.
* The United Kingdom banned the COVID vaccine for most children aged 12-17 because the found that the benefits of the vaccine don’t outweigh the risks for most young people.
*Dr. Peter McCullough, cardiologist and Senior Professor of Internal Medicine at the Texas A&M University Health Sciences Center, has called for a halt to vaccinating 30-year-olds due to “no clinical benefit” and safety concerns. He joins 56 additional authors from 17 countries who have signed an endorsement urging that Covid-19 vaccinations be stopped unless new safety mechanisms are immediately implemented.

But scientific fact is disregarded if it doesn’t fit the Left’s narrative.  Notice that Biden’s vaccine mandate doesn’t mention the tens of millions of Americans who previously had COVID and as a result now have natural immunities. A Cleveland Clinic study showed that natural immunities give even greater protection than the vaccine.  Spectrum Health has also acknowledged that fact and is exempting employees with natural COVID antibodies from their vaccine mandate.  The Biden administration also ignores therapeutics that have proven to be very effective in treating COVID.  We hear little to nothing of treatments that, especially when given early, have had tremendous results.  One of those highly effective therapeutics is monoclonal antibodies.  Yet, as Florida Governor Ron DeSantis, stated, “on September 13, HHS announced that it was seizing control of the monoclonal antibody supply and it would control distribution. And then on September 14, the announcement was more than 50 percent of the monoclonal antibodies that have been used in Florida were going to be reduced.” Once again it appears the Biden administration is playing politics by holding back life-saving treatments from Red states.

Biden is also playing politics with the lives of our U.S. servicemen.  Look at the concerning studies listed above regarding the myocarditis risk among young men.  As Tucker Carlson pointed out, “The fighting strength of the military is young, healthy people, virtually all of them at extremely low risk of dying from COVID.”  Yet the Biden administration is requiring all military members be vaccinated or receive a dishonorable discharge.  Again, natural immunities are not being considered and those who apply for a religious exemption are being stonewalled or blacklisted.  As Family Research Council’s Tony Perkins writes: “So is this really about public health — or a more sinister agenda? Can America really afford to lose hundreds — if not thousands — of dedicated, experienced service members in a dangerous global climate like this one? … But if the motivation is to “cleanse” the military of conservative men and women of faith, then it all makes sense.”

The Left continues to use a virus that has a survival rate of over 98% to implement their agenda.  They have successfully stoked fear and division by convincingly labeling the unvaccinated as a threat to society – turning neighbor against neighbor – to the point that a growing number of people on the Left are actually advocating for withholding medical treatment from the unvaccinated.  (Do we deny treatment to smokers or the obese?)  In addition, the Left has convinced millions of Americans to willingly trade liberty for safety, convincing them that the government will be their caretaker.  Fear has become their master and government has become their god.  Will our nation accept this tyranny or will we fight for freedom? In Who or in what is your trust?

“Some trust in chariots, and some in horses: but we will remember the name of the Lord our God. They are brought down and fallen: but we are risen, and stand upright. Save, Lord: let the king hear us when we call.”  Psalm 20:7-9