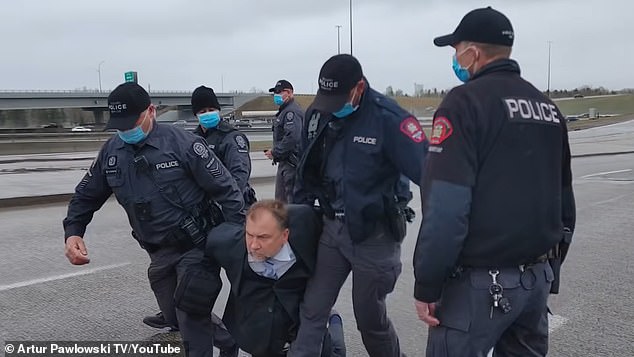 To our shame, it is only on occasion that world news brings the persecuted church into the field of vision of Americans, including the American church.

Every day, Christians are suffering on account of their faith – in prison, like Pastor Wang Yi in China, or like Pastor Andrew Brunson did in Turkey – or even suffering death, like the Egyptian martyrs whom ISIS famously beheaded on the beach of the Mediterranean Sea. These stories broke through the usual news cycle, but many Christians live under these threats every day.

We are used to hearing, if only on occasion, of the hardships of foreign Christians in strange-to-us, far-off places, but it is a sharp reminder of their struggles when Christians are being arrested and imprisoned right next door in Canada.

Grace Life Church, in Alberta Canada, had been meeting in person for 37 weeks without a Covid outbreak before Alberta Health Services had their pastor, James Coates, arrested and imprisoned for 5 weeks, before being released.

Pastor Coates immediately returned to the pulpit, preaching for several weeks before Alberta Health Services again interfered, this time sending police to put a double wall around the church building itself, effectively banning the church from meeting together there.

Here’s an excerpt from a statement by the Justice Centre for Constitutional Freedoms, which is representing Coates:

“The congregants of Grace Life refuse to accept the Alberta Government’s dystopian ‘new normal’. Their first loyalty is to obey their God, not government. They are committed to gathering, as they always have, for in-person worship services. They will challenge this excessive and unlawful government oppression rather than turn their back on their beliefs. They also believe they are lawfully exercising their Charter-protected freedoms and that the Government’s restrictions are not justifiable,’ states Justice Centre Lawyer James Kitchen.

“’Governments never destroy civil liberties without pointing to some reason that sounds good, such as ‘safety’ or ‘equality’. The very reason certain rights and freedoms are protected by the Charter is so that government cannot simply ignore those rights by merely asserting its actions are for a good cause. By continuing to exercise their Charter rights, despite the potentially dramatic consequences, Grace Life and Pastor Coates are bringing democratic accountability to bear on a government that appears indifferent to the societal harms of lockdowns and the dismantling of civil liberties,’ concludes Kitchen.”

Then, just this week in Calgary, Pastor Artur Pawloski was served with a court order before the church service, then pulled over after the service, arrested, handcuffed and brought to jail  for “organizing an illegal public gathering,” which in this instance simply means church.

“They’re destroying people’s lives, they’re telling me when I can worship God, which God I can worship,”Pawlowski told CTV News.

CTV also reports that, “Pawlowski added that his church gatherings were minimal compared to larger groups of Calgarians gathering to shop at big box grocery or department stores.”

The temptation, which many Christians have fallen into, is to accuse brothers like Pastors Coates and Pawloski rather than stand in solidarity with them. After all, it’s for “public health,” right? They could have followed orders. Why not operate your church at 15% capacity with masks and social distancing like the government demands? Why not go virtual like so many other churches have done?

In an interview with Allie Beth Stuckey on the Blaze Network, Pastor Coates answers this question: “It’s the Lord’s church; it’s not even my church. So for me to decide unilaterally , or for us as leadership to decide unilaterally, that we’re going to fundamentally alter the conditions of worship because the government has told us to or because we think  this virus is severe enough to warrant that – we’re actually usurping the authority of Christ over His church.”

Hebrews 10 says this, “Let us hold fast the confession of our hope without wavering, for he who promised is faithful. And let us consider how to stir up one another to love and good works,  not neglecting to meet together, as is the habit of some, but encouraging one another, and all the more as you see the Day drawing near.”

So, can this rightly be called persecution when the arrests and harassment are not for preaching the gospel, per se, but for violating public health orders?

I think to answer that we ought to go back in Church history, to the most famous period of persecution – under the Roman emperors, when Christ followers were being thrown to wild beasts.

The early church historians report that, technically, they were not persecuted for their belief in Christ either. They were free to worship God. Rome was a massive empire encompassing all sorts of different cultures, each worshipping their own little deities, but it was only Christians who would not also worship Caesar along with those gods.

We often joke that many treat government like a religion, but the early church was literally persecuted because they would not worship their government. Christians were blamed for hard times, because they were angering the Roman gods by their insistence that they would bow only to “Christ.”

Of course, praying to Caesar to save us from a virus would be ridiculous, but putting your hope in your president’s or governor’s mandates or in a vaccine to stop it in its tracks? That’s a no-brainer to many. Follow the science, even if the “science” tells you TO “[neglect] to meet together, as is the habit of some.”

In a sense, many Christians today are facing the same question that Christians in Rome were facing, albeit with lesser consequences, thank the Lord. Will we bow to Caesar or to Christ?

May we follow their example and Scripture’s command to, “hold fast to the confession of our hope without wavering.”