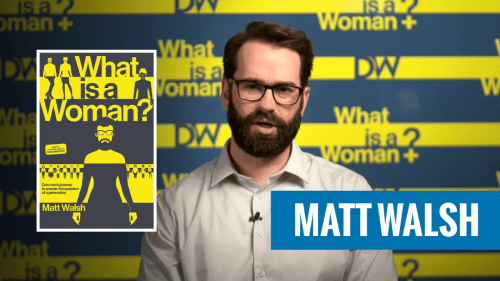 What is a Woman?

Arguably, the Left’s redefining of a woman, which oddly enough they cannot define, is the greatest propaganda foisted upon the American public to this point in time. To support my statement, I give you two quotes from Hitler’s Minister of Propaganda, Paul Joseph Goebbels: “There was no point in seeking to convert the intellectuals. For intellectuals would never be converted and would anyway always yield to the stronger, and this will always be ‘the man in the street.’ Arguments must therefore be crude, clear, and forcible, and appeal to emotions and instincts, not the intellect. Truth was unimportant and entirely subordinate to tactics and psychology.” The arguments made for transgenderism and the inability to any longer define a woman certainly are based on emotional ploys and completely avoid the intellect, as is so well shown in Matt Walsh’s new documentary, “What Is A Woman?”

Mark your calendar and plan to join us THIS Thursday, (June 23) at 1 PM, at the American Decency building (203 E. Main St.) where we will be showing this incredibly done film.

The second propaganda quote from Goebbels states: “If you tell a lie big enough and keep repeating it, people will eventually come to believe it. The lie can be maintained only for such time as the State can shield the people from the political, economic, and/or military consequences of the lie. It thus becomes vitally important for the State to use all of its powers to repress dissent, for the truth is the mortal enemy of the lie, and thus by extension, the truth is the greatest enemy of the State.”

Recognizing the current regime’s repeated and magnifying of the lie (propaganda) upon the American public by putting such people in positions of spotlight and authority; understanding this attack on common sense and the assault on the minds of American children, as this agenda is pushed in the public schools; watching the lie increasingly take hold of the public’s mind and gain ground as it marches throughout the population, corporations, and various institutions (including the Supreme Court of the United States of America; Matt Walsh should be considered no less than a hero as his film takes aim, ultimately, at the State and others who are propagating such propaganda.

When the brazenness of the culture and the propaganda of our day moves Christian institutions and others of “sound mind” to question their own sanity and beliefs; we must be armed with the truth and know how to wield this weapon effectively. “What Is A Woman?” shows us just how that is done.

Click here to watch this trailer of “What Is A Woman?” Share it on your social media platforms and let people know they can watch it at American Decency Association this Thursday at 1 PM. Thank you!