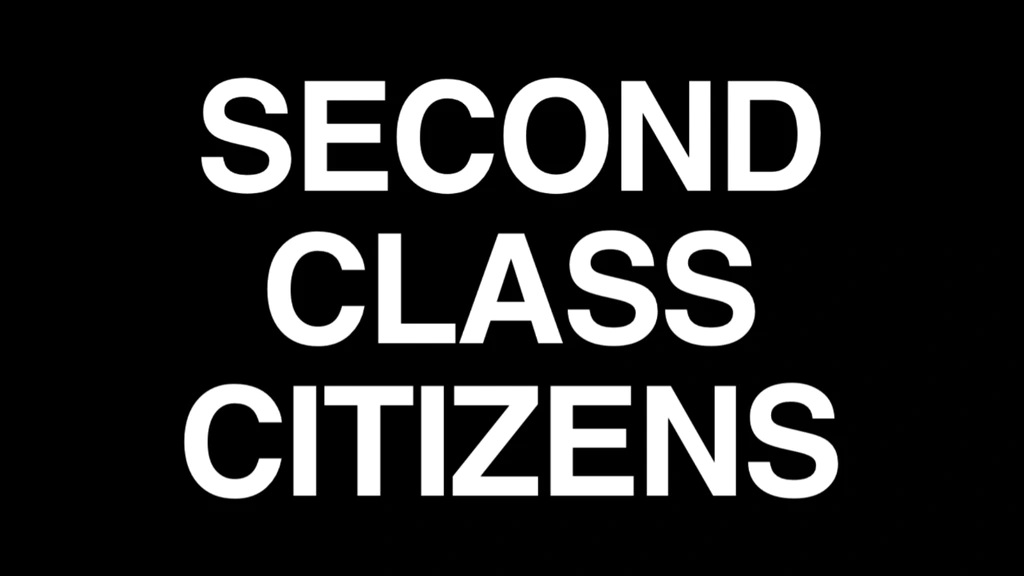 The idea of second-class citizens, or, those seen as less worthy of life, liberty, and the pursuit of happiness, has, throughout history, ended with devastating results. What else could one expect when denying that ALL men are created equal and, more importantly, created in the image of God? It is such thinking, spurred on by evolutionary theories, which led to the genocide of the Australian aborigines, American slavery, and Hitler’s attempt to exterminate the Jews, to name a few.

“Those who fail to learn from history are doomed to repeat it” is a statement attributed to several; regardless of the source, its truth is unmistakable, devastatingly so when it comes to denigrating a portion of society in the eyes of others. Have we learned from history? Perhaps the better question is what have we learned from history? History can either be a warning to avoid dangers or a blueprint of how to accomplish tasks, for good or for evil. What are we witnessing today?

For too long we’ve listened to leftist politicians, media personalities, and others get away with describing conservatives, Christians, and those who stand for their constitutionally protected rights and freedoms as sub-human—“dregs of society,” “deplorable,” etc.; demonized—these people are not only subhuman, they are a danger to the rest of us, “a pandemic of the unvaccinated,” labeling concerned parents as “domestic terrorists,” and January 6 detainees as “insurrectionists;” censored by the media and medical/scientific disciplines—heaven forbid that the truth or a contrary view be told which supports those who dissent from the party line; and finally, criminalized—making laws which help keep the second-class citizen in their place and thereby creating a common enemy, which takes the centralized thinking off the would-be oppressor and separates their opposition from civil society. Remember, what happened in Nazi Germany was “legal,” even though it was never moral. The above highlighted troubles often lead to imprisonment and potentially extermination. Boldly and objectively ask, “Where are they leading us?” and “Why?” Let us take the words of Auschwitz survivor Marian Turski to heart, “Auschwitz did not fall down from the skies.” We must wake up and recognize where we may be headed; prepare spiritually, physically, and build lines of connectivity among like-minded individuals.

The McAlvany Intelligence Advisor well asks: “Why are elites seeking to delegitimize, demonize, and even criminalize the conduct of those who oppose vaccine mandates, election fraud, or other actions taken by the current administration? If governments successfully create a sub-class of individuals (“domestic terrorists”), where might this ultimately lead?”

There are many who believe the development of second-class citizenry couldn’t happen in America; particularly not the brand that we have been hinting at in the above sections of this article. Recognize with me that the groundwork has been laid, there is some call to build upon it, and in some cases, it is being implemented.

Rasmussen recently conducted a poll with results that pre-COVID could not have been believed. However, with the continual demonizing, unconstitutional mandating, and fear-mongering, these results which point to an increasing acceptance of a denial of free-speech, free-thought, and self-governance are marching along a road to tyranny. How long before Congress recognizes the public support for unconstitutional second-class citizenry and imposes it upon our country, denying their oath to uphold the Constitution which was given to protect every man, woman, and child? Here are a few of the results (as reported from The Daily Signal):

*  Fines against those who refuse to take the vaccine were viewed favorably by 55% of Democratic voters and just 19% of Republicans, and 59% of Democrats favored a policy requiring unvaccinated people to stay inside their homes at all times, except for emergencies.

*  Forty-five percent of Democratic respondents favored the government forcing people into “designated facilities” until they get the vaccine—a measure opposed by 71% of all voters.

*  Twenty-nine percent of Democratic voters said the government should take people’s children from them if they refuse to get the COVID-19 vaccine, a measure viewed favorably by 7% of Republicans and 11% of unaffiliated voters.

We’ve already witnessed a form of medical second-class citizenry where there has been a denial of services (sometimes a matter of life or death) unless the patient was willing to be vaccinated.

Rep. Marjorie Taylor Greene (R-GA) says that January 6 defendants have been treated “worse than we treat terrorists in Gitmo.” She stated, “What’s happening to these people being held in custody is wrong, it’s unconstitutional, it’s a violation of their rights, and it is an abuse that I call on every member of Congress to pay attention to.” The representative from Georgia concluded her lengthy report, “The congressional visit to the DC jail on November 4 unquestionably proved that there is a two-track justice system in the United States. This two-tiered system is not based on race, violence, or conviction of crime, but politics.”

Early on I urged you to prepare spiritually; that is of supreme importance. If we continue down the road on which we are being corralled, America—the one of freedom and liberty which our founders formed and protected with a beautifully crafted Constitution—will be no more. If you are a true believer, you have a citizenship in heaven which surpasses the citizenship of any nation on earth. Your hope, strength, wisdom, and salvation flow from that heavenly kingdom and it grants you the ability to walk with boldness in truth and love and to discern truth. Hide God’s Word in your heart while you still have it; grow in grace and stand firm, being watchful. Call out to God with assurance; He who has God’s heart has His arm.