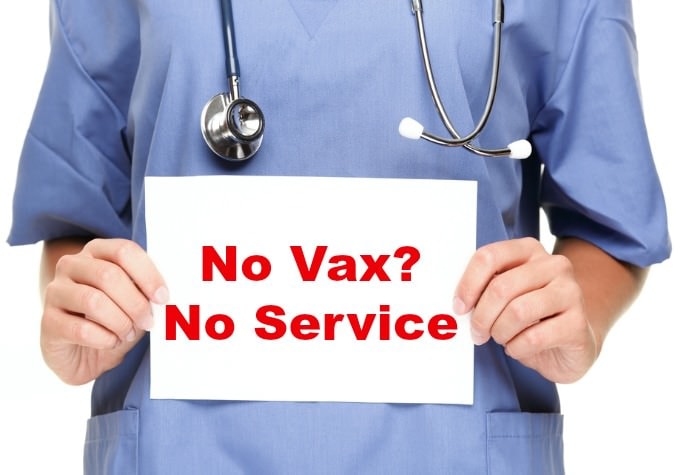 Most have gotten used to the sign at various stores which reads, “No shirt, No shoes, NO service.” Many even complied when stores insisted that a free American public don a mask in order to shop for necessary goods or services. If one objected to that, he or she might ask their friend to shop for them or even cut their hair, but there are certain things that we must do in person regardless of how creative we are. I cannot have surgery by proxy; I don’t know any surgeons who make house calls; and there are many medical services which work best, if aren’t necessary, when done in person. So what does one do when medical offices and institutions hang up their sign which reads, “No mask, No vaccine, No service?” We may be used to the idea of an unconstitutional rogue government going tyrannical on us, but our doctors? Those we’ve trusted and been in a working relationship with for thirty or forty-plus years? These men and women who have taken an oath to “do no harm,” is it possible for them to become medical tyrants? Sadly, we see it taking place before our eyes. Not everywhere, but it’s growing. I suppose the question is, will we sit silently by and watch tyranny crowd into many areas, crowding out freedom, conscience, and self-governance? Let me share a few frightening examples with you.

Katie Shier, wife and mother of five, has been refused a life-saving heart transplant by the University of Michigan hospital until she bows to their demand of getting vaccinated against COVID-19. The state-run university hospital, which has deep ties to Pfizer, also denied her application for a religious exemption.

With her heart already functioning at only seven percent of normal capacity, she told the Epoch times that she’s strongly opposed to the vaccine because she believes it is dangerous and could cause her frail heart to fail.

With many medical experts warning against the vaccine, the overwhelming number of reports on injuries caused by this vaccine, and Deborah Birrx recently revealing, “I knew these vaccines were not going to protect against infection. And I think we overplayed the vaccines;” why should anyone, including this mother of five, be forced to succumb to such medical tyranny? This is despicable.

For a fuller understanding of Katie’s case or a deeper understanding of the relationship between vaccine-maker Pfizer and the University of Michigan read this Epoch Times article here. This article also refers to another patient who is in need of a kidney transplant, stating, “Both (Katie Shier and the kidney patient) were on the list for a transplant but were removed after the university adopted a new policy that the COVID vaccine would be required in order to stay on the list.”

Another Epoch Times article ran this headline: Pennsylvania Woman Arrested at Doctor’s Office, Denied Care Over Refusal to Wear a Face Mask. This 62-year-old woman is “unable to wear a mask due to childhood trauma stemming from an assault during which she nearly suffocated.”

“In May, a mother filed a federal lawsuit against the DeVos Children’s Hospital in Grand Rapids, Michigan, for requiring her 17-year-old daughter, who has stage three renal failure, to have the COVID-19 vaccine before performing a kidney transplant.” (Epoch Times)

While not necessarily the norm yet, these are not isolated cases. Gratefully, there are those like Liberty Counsel, Pacific Justice Institute (PJI), and others who will stand in the gap for such cases.

“(PJI) argues the hospitals are carrying out illegal and unconstitutional policies by requiring medical treatment against the will of a patient.

“‘Individuals in the United States have the inherent and fundamental Constitutional Right given by God, not any government board, to seek or to refuse medical treatment or any part of a course of medical treatment,’ PJI states in its lawsuit it served on July 5 to the board of regents that oversees the University of Michigan.” (Epoch Times) 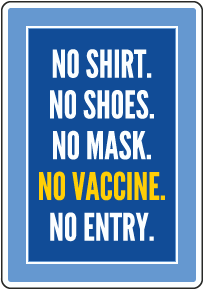 Dave Peters, senior counsel for PJI, said, “They are electing to let patients die by refusing to provide them with life-saving medical care by forcing a medical care that has no established benefits, if that’s not morally, ethically, and legally outrageous then I don’t know what is.”

Liberty Counsel has represented several veterans who have been denied organ transplants for refusing the COVID-19 vaccine and is currently representing “an unvaccinated client who is being denied post-op care for a kidney transplant she had before the vaccine existed.”

The military are being forced and coerced.

The medical workers are being forced and coerced.

“We the People” are being made to feel forced and are certainly being coerced by many hands throughout every discipline that have either been bought off or have fearfully bought into the agenda driven – yet no proof – fear that our God-given, constitutionally protected rights of liberty and self-governance and national sovereignty should be for sale for a modicum of their peace of mind. Those at the top of many medical institutions are joining in the coercion.

Yet, there are some medical safe havens, like Christian Healthcare Centers, who desire to work with people wherever they fall on the spectrum of belief regarding COVID-19, respecting their God-given rights and personhood. Although based in Michigan, there are many from other states who have found their services useful.

I began by asking, “Will we sit silently by and watch tyranny crowd into many areas, crowding out freedom, conscience, and self-governance?” Will you sit silently or will you reach out to those who are in the fight supporting them with words of encouragement and monetary gifts showing your appreciation, helping to cover the enormous costs? When you learn of those who are being unconstitutionally denied medical treatment will you contact such institutions respectfully voicing your legitimate concerns and disdain? Yes, this is a matter for prayer; but, it IS a matter for action as well.