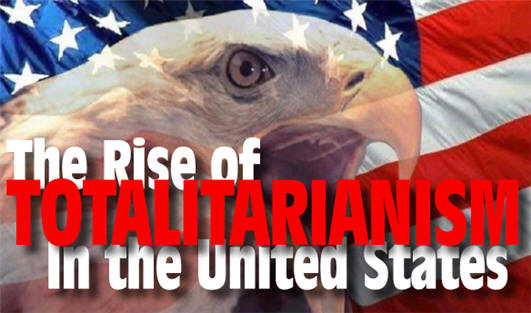 Last month I wrote about the development of second-class citizens; this month it’s important to look at the development of totalitarianism within the United States and globally. While many may think, “You’re crazy; totalitarianism is gulags and food lines. We don’t have that here in America;” it’s vital that we recognize that “gulags and food lines” are among the final pictures of totalitarianism, not the beginning stages. It’s akin to looking at the wreckage of a semi-truck and car collision, saying, “That’s not a car; it doesn’t function like one or look like one, so it can’t be a car.” Also, one might consider the political prisoners of January 6, 2021 as being held in a “gulag;” and remember, we’ve witnessed several occasions where government has shut down private food lines, even fining those who passed out food to the hungry. At the very least we’ve seen totalitarianism flex its muscles to see what they can or cannot get away with. We may not be at the Mao and Stalin point of totalitarianism yet; but we must recognize the steps it takes to get there, the fact that technology is making it easier to achieve, take an honest look at ourselves, and cut the noose before it gets too tight. The elites will tell us it’s for our own good; but remember, “No one ever complied their way out of totalitarianism.” (RFK Jr.)

As American Thought Leaders interviewed Rod Dreher, author of Live Not By Lies, he explained the roots and reasons that leave a country open to totalitarianism as listed by Hannah Arendt, a German Jewish refugee from Nazism, in The Origins of Totalitarianism. In this book she looked at both Germany and Russia to see how totalitarianism came to power and what aspects of their social life made them susceptible to this tyrannical evil. As you read through this list, think open-mindedly about what has taken place in America over the past two years. Could this be why those in authority have been corralling the masses down the road which they have chosen? Is this why it’s so important to them that we do not hear any dissenting voices to their propaganda narrative, that people do not think for themselves, and that each person gets injected with a substance that has been proven ineffective and for which only time will tell its effects on the human body and mind?

First, and by far the most dangerous, was mass atomization of the people and widespread loneliness. This happens naturally when on a large scale lifestyles are disrupted, people’s ties to the institutions are severed, and close-knit families unravel. It leaves people without direction and not knowing who they can trust. Dreher explains that the loneliest generation in America today, surprisingly, is “Generation Z.”

Second was the loss of authority. Institutions, religion, all the things that had given people meaning, structure, and a sense of direction in life were called into question. Floundering, the people grabbed on to totalitarianism which gave a promise, albeit a false one, of direction.

Third was a willingness to believe propaganda; they would believe any lie so long as it conformed to whatever people wanted to believe in the first place. “When we lose desire to know the truth – even if the truth hurts, even if the truth goes against what we want to believe – then we are opening the door to totalitarianism, again, of either the left or the right.” (Dreher)

Be warned, these are the things which opened, and still open, the door to totalitarianism. Our wealth and our democratic history will not protect us from totalitarianism. Dreher reminded his listeners of Aleksandr Solzhenitsyn’s warning, “People around the world think that what happened in Russia can’t happen here. In fact, it can happen in any country on earth, under the right set of circumstances.”

Technocracy and tyranny walk hand in hand; Mao, Hitler, and Stalin likely fantasized about the levels of total control made possible by today’s technology. The National Pulse reports, “The Chinese Communist Party has developed an artificial intelligence prosecutor that can identify and suggest charges for alleged crimes including ‘dissent’ and ‘provoking trouble.’” There’s talk of new cars in the European Union soon containing a “black box” to record driving data for authorities. Let’s not forget facial recognition technology, implanted micro-chips, weaponized immigration, the deliberate breakdown of law and order, manipulated inflation, geo-engineering, and the list goes on. Although another article for another time, recognize that Central Bank Digital Currencies plus vaccine passports equal two of the greatest tools for total control ever known to mankind. With all these tools available to global and national tyrants, totalitarianism seems inevitable; but the triumph of tyrants is never certain. Good men and women must stand and raise families that will stem the rising tide. “The family is such an important source of resistance.” (Dreher)

“What makes a totalitarian society totalitarian is that there are no middle institutions between the individual and the government.” (Dreher) The totalitarian government sees the family as a rival to the ruling ideology; so, the state does what it can to eliminate the traditional family unit. Pointing to the school, he says this is why they are teaching Critical Race Theory, propaganda, and gender ideology.

It’s important to raise our children to be Christians and dissidents. We must help our children be able to discern truth from lies. Totalitarians assault the family because it’s the God-designed basic building block for society; its destruction leaves us open to totalitarianism, worshiping the state rather than the one, true Creator God. We must build our families strong, in and on the only true stability known to mankind—the Lord Jesus Christ. It’s sad if our nation fails; but it’s devastating if our family leaves this world without a saving knowledge of Jesus, and without walking in holiness. May all that come behind us find us faithful and may our children be lights in a dark and dying world.

Again, it’s in Him that our hope lies. Anything else is to live by lies.