I Know Whom I Have Believed

America, like every country, has had her share of affliction, war, strife, and discord. Historically, we have drawn closer to God during these times. When no consensus could be reached at the Constitutional Convention and all would seem to be lost over the issue of State’s rights, Benjamin Franklin appealed to those gathered there asking that they take three days to have honest and unheated conversations with one another from opposing viewpoints and that a chaplain would be appointed to “introduce the business of each day by and address to the Creator of the universe, and the Governor of all nations, beseeching Him to preside in our council, enlighten our minds with a portion of heavenly wisdom, influence our hearts with a love of truth and justice, and crown our labors with complete and abundant success!”

During times of drought, flood, or other natural disasters, presidents and governors would proclaim a day or period of time for fasting and humiliation, calling upon the God of Heaven, the Creator and Sustainer of all.

During times of war America has been led to call upon her God and her Founder, to seek His blessing and protection. There are many books that remind us of national and personal revival during the affliction of war-time; two of these include Christian Memorials of the War by H.B. Hackett and The Great Revival in the Southern Armies by William W. Bennett.

Arguably, the greatest affliction to hit this great nation would be The Civil War, where brother fought against brother and our history pages are sadly stained with their blood. As we give thanks to God for those who have died throughout our nation’s history so that we could be free (and also look with gratitude to God for those who are still living), we know that the Hand of Providence continues to draw men to Himself, protect and provide, and it is He that raises nations up and brings them low, even in times of that great affliction known as war. It is in this vein of thought that I want to share this account that was sent to me:

One of the favorite hymns, “I Know Whom I Have Believed” was written by Daniel Whittle who had enlisted in the 72nd Illinois infantry during the Civil War and headed into the bloodiest conflict in America’s history. He was badly wounded in the Battle of Vicksburg and then taken prisoner.

He tells of his conversion experience: “We had many engagements, and I saw many sad sights, and in one of the battles I was knocked out, and that night my arm was amputated above the elbow. As I grew better, having a desire for something to read, I felt in my haversack, which I had been allowed to keep, and found the little Testament my mother had placed there. I read right through the book—Matthew, Mark, Luke, to Revelation. Every part was interesting to me; and I found to my surprise that I could understand it in a way that I never had before. When I had finished Revelation, I began at Matthew, and read it through again. And so for days I continued reading, and with continued interest; and still with no thought of becoming a Christian, I saw clearly from what I read the way of salvation through Christ.”

“While in this state of mind, yet still with no purpose or plan to repent and accept the Saviour, I was awakened one midnight by the nurse, who said: ‘There is a boy in the other end of the ward, one of your men, who is dying. He has been begging me for the past hour to pray for him, or to get someone to pray for him, and I can’t stand it. I am a wicked man, and can’t pray, and I have come to get you.’”

“‘Why,’ said I, ‘I can’t pray. I never prayed in my life. I am just as wicked as you are.’ ‘Can’t pray!’ said the nurse; ‘why, I thought sure from seeing you read the Testament that you were a praying man. And you are the only man in the ward that I have not heard curse. What shall I do? There is no one else for me to go to. I can’t go back there alone. Won’t you get up and come and see him at any rate?’”

“Moved by his appeal, I arose from my cot, and went with him to the far corner of the room. A fair-haired boy of seventeen or eighteen lay there dying. There was a look of intense agony upon his face, as he fastened his eyes upon me and said: ‘Oh, pray for me! Pray for me! I am dying. I was a good boy at home in Maine. My mother and father are members of the Church, and I went to Sunday School and tried to be a good boy. But since I became a soldier I have learned to be wicked. I drank, and swore, and gambled, and went with bad men. And now I am dying, and I am not fit to die! Oh, ask God to forgive me! Pray for me. Ask Christ to save me!’”

“As I stood there and heard these pleadings, God said to my soul by His Spirit, just as plainly as if He had spoken in audible tones, ‘You know the way of salvation. Get right down on your knees and accept Christ, and pray “I dropped upon my knees and held the boy’s hand in mine, as in a few broken words I confessed my sins, and asked God for Christ’s sake to forgive me. I believed right there that He did forgive me, and that I was Christ’s child; I then prayed earnestly for the boy. He became quiet, and pressed my hand as I pleaded the promises. When I arose from my knees he was dead. A look of peace was upon his face, and I can but believe that God, who used him to bring me to my Saviour, used me to get his attention fixed upon Christ and to lead him to trust in His precious blood. I hope to meet him in Heaven.”

Years later, Whittle penned the words to “I Know Whom I have Believed” as an expression of his testimony of faith in Jesus Christ.

I know not why God’s wondrous grace To me He hath made known,
Nor why, unworthy, Christ in love Redeemed me for His own.

But “I know Whom I have believed, And am persuaded that He is able
To keep that which I’ve committed Unto Him against that day.”

I know not how this saving faith To me He did impart,
Nor how believing in His Word Wrought peace within my heart.

But “I know Whom I have believed, And am persuaded that He is able
To keep that which I’ve committed Unto Him against that day.” 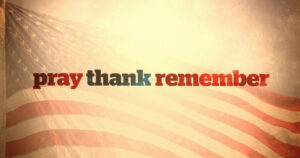 This Memorial Day I urge you to be in prayer that God, by His Holy Spirit, would draw soldiers around the world to Christ, the only way of salvation and true freedom. Pray that our nation would once again call upon our God, the Creator of all, in humiliation and repentance, during these times of confusion and upheaval. Pray that those in leadership positions would either bow their knee to Almighty God and submit to the laws of this land (our Constitution) or that God, by His grace, power, and love, would remove them for His glory, honor, and praise. This we pray, in part, that the sacrifice of those men and women we remember and honor today is not in vain. Pray with assurance; for He is still sovereign, still directing in the affairs of men, and is still working all things together for the good of those who love Him, who are the called according to His purpose.