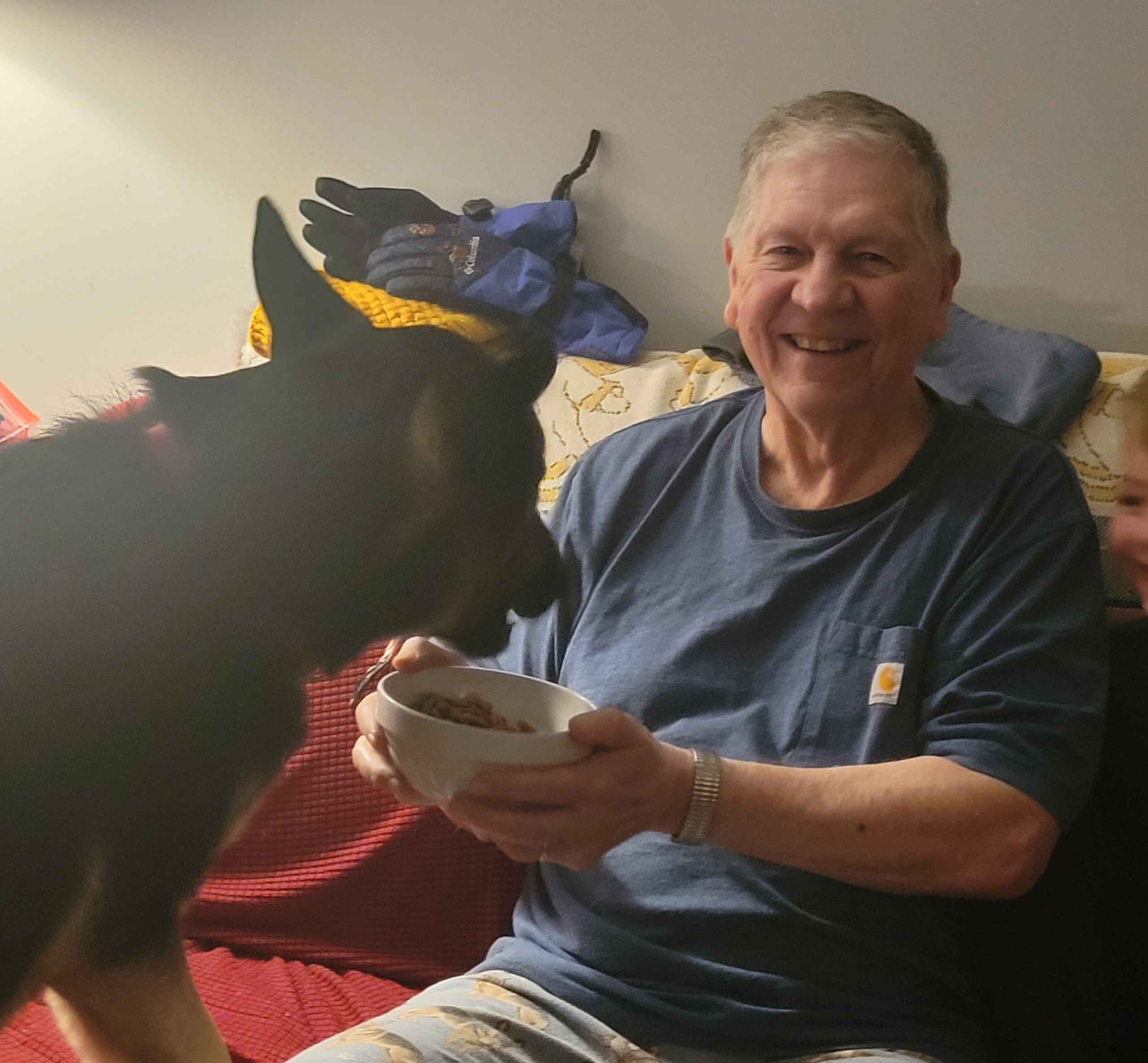 From early morning December 29 through early morning January 11, my 2-year-old German Shepherd Ridley was gone.  It happened when I let Ridley out in the morning as I do every day while all is quiet and there’s none of the usual farm traffic.

Two seconds after he stepped out the door, I heard another dog bark and thought. “Oh no, there is a dog out there.”  It was my son’s dog who’s hardly ever out at that time of day, but when the two are loose together it usually means they are OFF and on the run. They have always come back on their own after a couple of hours, although they had been gone as long as 3 days.

As the days passed, and my son’s dog coming home without Ridley, I felt the outcome wasn’t going to be good; especially with the recent temperatures with wind chills below zero. Then, I heard through Facebook that he was seen next to a main highway, with high traffic. I dreaded the thought.

That prior evening and that morning, January 11, I was heavy-hearted as I had answered a call to go out about 6 miles away where Ridley had been seen walking down the railroad track.  The woman who had called me was concerned that the pads on his feet might be raw from the miles of continual walking that he had been doing and how careless he seemed to be regarding traffic.

It looked hopeless and I was getting weary of open doors closing, one after another – coming up on him while I was searching and seeing him running off into the forest and hearing that dogs on the loose can revert to a self-preservation instinct and avoid those trying to help them.  So I thought how can I possibly catch him? I was even in contact with a local trapper who only reinforced my thinking.

And that’s where my faith comes in. To tell the rest of the story I need to tell you the following.  I have been a Christian since 1970 and I take my faith seriously.  That means I trust God to listen to me and my prayers.  I also know that I need to PRAY and listen to Him. I have been doing that for a long time and in a world where many don’t seem to give much time to God or His Word. God showed me long ago when He saved me out of a pornography addiction (1970) that He does change lives and walks with those who seek His face and seek Truth.

So that morning of the 11th, I was deeply frustrated and troubled in my heart, soul, and mind.  I was up at 3:30 in the morning reading my devotions and praying.  Jan got up with me at 4:15 and was also praying and reading the Bible and a few Christian writings.

I said, “Jan can I talk with you for a few?  I am really struggling.  It just seems like Satan is attacking me and trying to pull me apart. Ridley’s seen over there.  I go over there. Nope, not there anymore. Well, he was for a few days. Now he’s over here.  Then I see him and he sees me from a distance and I call out to him and he runs into the woods. Now he’s over there and it’s freezing and he is always on the move.  And now he’s not there anymore either.

I had prayed strongly and passionately for God to help me get Ridley back.  But, here is the question: “Was I making an idol out of Ridley?”

In that early morning hour, I shared with Jan (we are nearing our 52nd anniversary) a few things that I had read: “God considers all his creatures, but the believing soul is an object of his choicest love – even the love with which he loves his Son.

“When a soul believes, then God’s eternal purpose and counsel concerning him – whom He chose in Christ before the foundation of the world – is brought to term. Can you imagine the love God has for a child He has carried so long in the “womb” of his eternal purpose? If God delighted in His plan before He spoke the world into being, how much greater is his delight to witness the full fruition of his labor – a believing soul. Having performed his own will thus far, God will surely raise all the power He has in that believers behalf, rather than be robbed of his Glory within a few steps of home.”  [William Gurnall, The Christian in Complete Armour]

As I was finishing up this brief reading, I thought I heard a sound outside. Then I thought it could have been a whine.  Jan didn’t hear it, but then I said “let me check the front door.”  I turned on the light and there looking longingly up at me was Ridley!

I opened the door and he came bounding in whining with joy as if to say “I’m home! I’m home!”   I couldn’t believe what I was seeing. Nothing had pointed to him knowing how to find his own way home. But, here he was: RIDLEY! I began to weep like I haven’t for a long time, waking up our grandkids who were staying the night with us.  They came running out of their bedroom with my grandson putting his arm so understandingly around me.

The question I was discussing with Jan was answered:  Am I out of God’s will?  I fall far short of what I ought to be but God is gracious. HE WH0 HAS GOD’S HEART DOES NOT LACK FOR HIS ARM. (William Gurnall)

To see some pictures and a video.