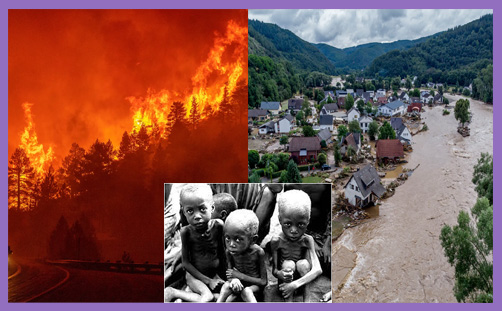 Fire, Flu, And Famine – What Else Could Go Wrong?

In 1989, a visit to a supermarket led to the fall of the USSR.  Boris Yeltsin stopped at an American grocery store after visiting the Johnson Space Center.  He was astonished by the abundance of food and products, a sharp contrast to the breadlines and empty shelves he was accustomed to in the Soviet Union.  He saw the stark difference between capitalism and socialism.  Yeltsin later wrote in his autobiography, “When I saw those shelves crammed with hundreds, thousands of cans, cartons and goods of every possible sort, for the first time I felt quite frankly sick with despair for the Soviet people.  That such a potentially super-rich country as ours has been brought to a state of such poverty! It is terrible to think of it.”

Now, 33 years later many in the U.S. are also sick with despair – that the United States of America, the most materially-blessed nation in the world, is being brought down to such a level. In Rudyard Kipling’s famous poem, The Gods of the Copybook Headings, there’s a line which reads: “but though we had plenty of money, there was nothing our money could buy.”  Thanks to Biden inflation, Americans may soon have neither plenty of money nor food. For months frustrated Americans have felt as if we’re turning into a third world country as Biden’s policies have led to bare shelves and skyrocketing food prices.

The baby formula crisis is giving Americans a taste of what could very well be ahead for all of us.  Desperate mothers are driving hours in search of formula to keep their infants alive.  Several babies with specific medical conditions have been hospitalized after parents have been unable to find the specialty formula they need.  Unsurprisingly, the Biden administration has focused more on the “right” to murder babies, than making sure they’re fed.  For four months the largest producer of baby formula has been shuttered by the FDA.  Biden’s FDA shut down the Abbott factory in February due to suspected bacterial contamination, which has yet to be proven, but no one in the administration took steps to ensure there would be an adequate supply of formula for our nation’s needs to compensate for the loss of Abbott’s products.  Yet pallets and pallets of formula are stockpiled at our southern border designated for illegal immigrants – but not American babies.

However, the concern of not being able to find certain products may soon escalate to far greater food shortages – not just here in America, but around the world. There is a “perfect storm” of circumstances that’s leading to a global food crisis.

Ukraine is considered one of the most important “breadbaskets” of the world.  As the war in Ukraine is prolonged, crop planting is adversely affected, while Russian military purposefully destroys stockpiles of grain.

In the U.S., not only has the cost of fertilizer increased by as much as 300% from last year, farmers are having difficulty getting the fertilizer they need since much of it is imported from Russia.  Add to that the higher price of seed and soaring fuel costs, many farmers may not be able to afford to plant as many crops as usual.  Diesel is the lifeblood of farmers, but not only are there shortages of the fuel, the average price per gallon in the Midwest is $5.34.  A year ago, it was $2.14.  Filling a tractor tank daily now costs some farmers $1,000 and the most intensive part of the farming season is just beginning.

Then there is the strange phenomenon of U.S. food processing facilities being destroyed by fire.  Is it just coincidence that in the first four months of 2022 alone at least 17 major incidences of fires, explosions, and even plane crashes have impacted food processing plants?  In all of last year there were only 11 such mishaps.  While I don’t know if there is a sinister cause, I do know these incidents will have an impact on our food supply.

To top it off, a bird flu is impacting the flocks of chicken farmers.  In Iowa alone, 13 million chickens have had to be destroyed and the nationwide total farmers have lost is: 22 million egg-laying chickens, 1.8 million broiler chickens, 1.9 million pullet and other commercial chickens, and 1.9 million turkeys.  We’re already seeing the impact in the cost of meat and eggs at the grocery store.

Yet no matter how concerning the picture is for the U.S., the outlook for other regions of the world is far more dire.  In many developing nations millions of people could face starvation.  A word we don’t hear too often is being used to describe the coming food crisis:  famine.  Areas such as the Mideast and Africa are expected to be especially hard-hit.   Some nations are already rationing food.

But even though conditions are rapidly deteriorating in our nation and around the world, as Christians we should not wallow in despair or live in fear. “And you will hear of wars and rumors of wars. See that you are not alarmed, for this must take place, but the end is not yet. For nation will rise against nation, and kingdom against kingdom, and there will be famines and earthquakes in various places.”  Matthew 24:6-7

However, we should prepare for worsening times so that we can not only provide for our family but also minister to others. “Now in these days prophets came down from Jerusalem to Antioch. And one of them named Agabus stood up and foretold by the Spirit that there would be a great famine over all the world (this took place in the days of Claudius). So the disciples determined, every one according to his ability, to send relief to the brothers living in Judea.   And they did so, sending it to the elders by the hand of Barnabas and Saul.” Acts 11: 27-30

And most importantly, place our hope in our Heavenly Father who promises: “Behold, the eye of the Lord is on those who fear him, on those who hope in his steadfast love, that he may deliver their soul from death and keep them alive in famine.”  Psalm 33:18-19