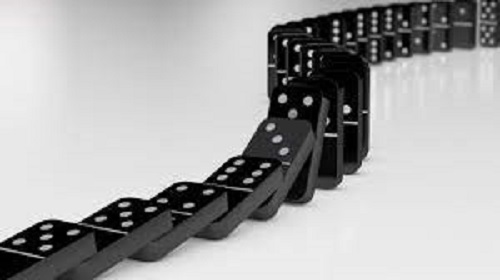 Falling in line or just falling?

Certainly not what should be, but this is what we are experiencing. The “Law of the Land” is only law until it’s decided by elites that it’s not. Truth is only “truth” and applicable to life until political, medical, educational, and other elites decide that it’s no longer truth, replacing it with “fake science” and deceptive lies that will further their agenda. Marxist elites and social engineers decide that rights can be redesigned and reapplied to the extent that such rights no longer belong to those to whom they were originally given – now bestowed only to the protected class that meets the agenda being pushed by an out-of-control government.

This isn’t a new phenomenon rearing its ugly head; but those who have eyes to see are seeing it more clearly than ever before. On The Briefing (11/2/22), Dr. Mohler shows how the medical establishment, with its several arms – including the insurance industry – have fallen in line with LGBTQ revolution enthusiasts to “change the entire society.” He helps us to see that to simply fall in line is to actually fall.

“…one of the things to note is that medical debate is largely disappearing. … When you look at the major professions, the easiest to imagine in the secular context are medicine and law. You look at medicine and law, what makes a profession a profession is that it defines itself, it licenses itself, and it regulates itself. It sets the rules by which the profession and the professionals in it are to operate. So, if you can establish what is the best practice in the law, you can change the entire society.

“If you can change what is considered to be the best practice when it comes to something like medicine or medical treatment or health policy, you can also change the entire nation. You can change the entire culture. But there’s more to it than just that. Because as you’re looking at the professions and as you’re looking at how moral change takes place…you recognize it’s even more complicated and the reality is even more powerful. …you start with doctors and you start with redefining medical practice, best practices, or best medical care when it comes to the medical profession. But the medical profession doesn’t pay for itself. Someone has to pay for it. And one of the big players when it comes to paying for medical care is the insurance industry.

“But it’s not just the insurance industry. It is also federal and state governments when it comes to state taxpayer supported healthcare, Medicare, Medicaid. But not only that, all kinds of economic transfers between governments and between government and medicine. You’re looking at medical research being a part of this as well. My point is this, you are looking at a major moral agenda being redefined in medical terms and being presented to the public and to patients as if this is now settled medical practice, when what it represents more than anything else is a transformation in the society in moral, even more than in medical terms.”

Dr. Mohler shows how this happened in the 1970s regarding homosexuality: “…the American Psychiatric Association before, at an annual meeting, they completely changed their position, they considered homosexual desire, homosexual orientation, and homosexual behaviors all to be forms of psychiatric unhealth.

“And that unhealth came with specific diagnoses and all the rest. But in the course of one meeting, all of a sudden it changed into an absolute reversal. Now it is no longer a matter of psychiatric unhealth to be a male homosexual or to practice homosexuality or to be driven by homosexual desire, but rather, it is now unhealth to be unsettled about that fact about oneself.”

Today, the “T” of LGBTQ (transgenderism) is in the “reversal stage” of the medical community, as they fall in line with prevailing thoughts, surgeries, and medications, all absent from real science. It’s not even that a majority of the people believe such things are good or real solutions.

Gary Bauer reported (11/2/22), “According to a recent survey by Summit Ministries, 75% of those who understand the issue say the transgender movement has gone too far in pushing sterilizing drugs and mutilating surgeries on children.

“In fact, even some transgender activists now admit they have ‘gone too far.’

“A Rasmussen poll found that 75% of Americans believe there are only two genders, and 68% said that teachers should not be counseling students about gender identity without parental consent.

“In spite of the left’s efforts to mock Florida’s Parental Rights in Education Act, which prohibited teachers from discussing issues of sexual orientation and gender identity with young children, polling found that the law was widely popular.  Even a majority of Democrats supported the legislation!”

This goes beyond LGBTQ issues. Think about the many troubles physically, economically, emotionally, and politically that we’ve experienced regarding all things COVID-19 (not limited to masks, social distancing, “vaccines,” and elections). Our Constitution was set aside; business, personal, and religious freedoms were trampled; medical best practices were discarded and replaced nearly overnight; safety precautions which had been put in place for the public’s safety were ignored; professionals who disagreed, giving warning against the agenda-driven demands were de-platformed and attacked; and the list goes on.

The lack of transparency, the denial of discussion, the various professions falling in line, combined, is causing us to fall. It’s happening across the board with many national and international issues, bringing about the demise of our nation.

When did “We the People” become so lethargic and unaware and unthinking that “We,” not each individual but as a whole, willingly gave up our right to think, decide, and self-govern? Why did “We,” by and large, decide to fall in line with whatever the elites and their minions said regarding whatever topic and whatever end they pushed us toward? Do “We” even realize that simply falling in line behind these professions/elites who have fallen in line simply makes us fall?

Dear Reader, never forget that the fear of the Lord is the beginning of knowledge and wisdom. When a profession or government denies God’s existence or what His Word tells us, their “wisdom” and “knowledge” should be suspect. That doesn’t mean we reject everything they say; but we must do our due diligence, checking their “truth” with the only real Truth, which is the Word of God. Either we comply with God regarding His definitions and designations or we rebel against Him; there is no third option. The results are directly dependent upon our choices. The prophet Isaiah lists those choices and rewards definitively. “Come now, and let us reason together, saith the Lord: though your sins be as scarlet, they shall be as white as snow; though they be red like crimson, they shall be as wool. If ye be willing and obedient, ye shall eat the good of the land: But if ye refuse and rebel, ye shall be devoured with the sword: for the mouth of the Lord hath spoken it.” (Isaiah 1:18-20)