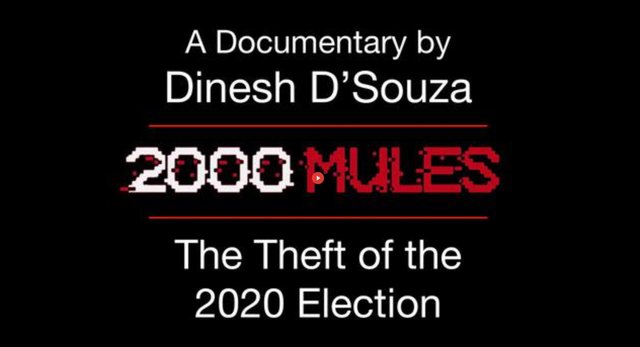 “2000 Mules will settle the issue beyond a shadow of a doubt… The evidence is so conclusive, so decisive, that it leaves nothing to argue about.” These are the words that Dinesh D’Souza uses to describe his latest film, “2000 Mules,” which covers, in depth, the issue of election fraud that took place during our last presidential election. If you are a concerned American, regardless of which side of the aisle you come from, you need to see this film. Grab a friend, family member, or several of the same and head over to the American Decency building (203 E. Main St. Fremont, MI) TODAY, Thursday, June 9 at 1 PM to view this important film with other truth seekers! DON’T MISS OUT. Watch this trailer of 2000 Mules then encourage others to view this important film too.

In this 25 minute Crossroads interview, Election Fraud Is Organized and Nationwide, Hans Von Spakovsky states, “For the past several decades, there have literally been dozens of organizations formed on the left to engage in voter registration. But more importantly, to, for example, file lawsuits against states to get rid of every safety and security protocol put on.” Come to American Decency today at 1 PM and listen to what else Hans Von Spakovsky has to say in the film 2000 Mules.

In another Crossroads interview, with Dinesh D’Souza, one can hear:

“A tactic of mass fraud was used in the 2020 presidential elections, where alleged paid couriers, called ‘mules,’ were traveling to various nonprofit groups and ballot drop boxes across county lines to stuff illegal ballots.

“This is the conclusion of a new documentary, ‘2000 Mules,’ from filmmaker and author Dinesh D’Souza, and supported by surveillance footage, massive amounts of data, and whistleblowers who agreed to go on camera. We speak with D’Souza about his findings, and what this means for the nation.

“‘We’re talking about very significant fraud and fraud that really would, … if you subtract the fraud from the Biden column, you begin to see Biden states moving into the Trump camp,’ D’Souza said.

“However, was this enough fraud to change the outcome of the election? D’Souza states, ‘It was absolutely.’”

What was Trevor Loudon’s first reaction when he saw the film 2000 Mules? In another Crossroads interview he states, “I was thinking I’m very keen to see what these organizations are. Because as I identified, there was a network of organizations set up by pro-Chinese Communists in 2019 and it was overlapped considerably with Black Lives Matter. And in Dinesh’s movie they talked about many of these activists that they tracked were involved with Black Lives Matter.” Trevor went on to talk about how the Chinese Communists had a network called “seed the vote,” setting it up in seven key swing states. After naming these organizations and the states they were working in, Trevor stated, “They claim they won six of the seven targeted states for Biden/Harris,” also showing how they are tied to the Chinese Communists.

You can watch the whole of this interview here. Trevor Loudon starts at the 24:30 mark. With his wealth of knowledge and passion for truth and freedom, one can’t help but leave the interview amazed, saddened, and perhaps, a bit angry.

All these interviews point to the need of such a film as 2000 Mules and the importance of you taking your time to come to the American Decency building today at 1 PM to view it with other truth seekers.

DON’T FORGET! Next Thursday, June 16, 2022 at 1 PM, American Decency (203 E. Main St.) will be providing extremely important and cutting edge information through Frank Gaffney’s webinar regarding The Chinese Communist Party is Transitioning to War: What are We Doing? (Keep an eye on your inbox for more information!)