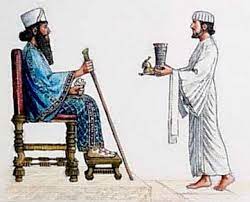 The Bible relays the stories of several cupbearers within its volumes. Nehemiah was the cupbearer to King Artaxerxes when he was moved by God to return to rebuild the city walls of Jerusalem. Going back a thousand years, Joseph met a cupbearer in prison whom he asks to petition the Pharaoh for Joseph’s own freedom.

In those times, a cupbearer, when he brought the king his cup, would test it himself for poison, leaving the king’s own life completely in the hands of the cupbearer.

While these are the only occasions where “cupbearers” are mentioned in the Bible, there are a few time when the responsibilities of the office of cupbearer are referred to, although we might not immediately recognize them. In these cases, the “cup” is delivered by God Himself.

For in the hand of the LORD there is a cup with foaming wine, well mixed, and He pours out from it, and all the wicked of the earth shall drain it down to the dregs. Psalm 75:8_:_

The cup in the LORD’s right hand will come around to you, and utter shame will come upon your glory! Habbakuk 2:16

Thus the LORD, the God of Israel said to me: “Take from my hand this cup of the wine of wrath, and make all the nations to whom I send you drink it.” Jeremiah 25:15

In the Old Testament, throughout the prophetic books, this image of God serving His wine to Israel and to the nations is repeated over and over. And in every example, God’s cup is a cup of “wrath” or of “staggering” leading to shame.

So, it’s Easter weekend. And, if church historians were 100% accurate with their dating methods, 1,990 years ago today, Christ was crucified in our place. And, the night before, he knelt in the garden to pray with His disciples and ask, “My Father, if it be possible, let this cup pass from me; nevertheless, not as I will but as You will.” And then, on the cross, He “drunk to the dregs, the bowl, the cup of staggering.”

God gave the nations His cup of wrath to drink, but Christ, our cupbearer, drank it in our place.

In the story of Joseph, while he was in prison, Joseph asks a favor of Pharaoh’s cupbearer: “Only remember me, when it is well with you…” Of course, the cupbearer famously when he was restored to His position forgot all about Joseph. Our Cupbearer did not forget! Joseph’s request is almost exactly echoed by the thief on the cross who asked our Cupbearer, “Jesus, remember me when you come into your kingdom.” And Jesus assured Him, “Today, you will be with me in Paradise.”

While Christ drained the cup of wrath Himself, He served His disciples a cup as well, saying, “This is my blood of the covenant, which is poured out for many for the forgiveness of sins.”