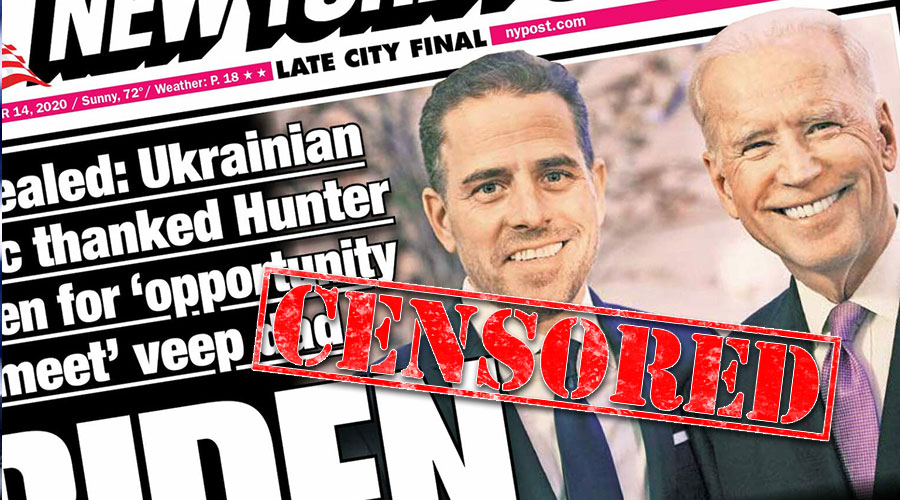 A Most Revealing Coverup

Towards the end of the 2020 presidential election race every major news outlet, the most influential social media platforms, and 51 former United States intelligence officials united in an unprecedented effort to ensure that one news story would not impact voters’ decisions.

The energy put into killing this story is evidence of two things: it would have prompted people to vote a certain way had they been allowed to know about it and this coalition did not want the election to go that way.

Without even getting into what the story that had to die was, this cover up is treasonous. News, social media, and national intelligence all exist, purportedly, to serve the citizen, and here they are instead caught manipulating it to ensure their preferred outcome in the election.

Unarguably, the biggest betrayal comes from the former government employees, many of whom doubtless could have verified the veracity of the story with a simple phone call. The FBI had the laptop in hand, at that point. They didn’t make that call, however, or if they did, they decided it was better for the country that your vote be uninformed on this issue.

The issue, as you may recall, was the now-president’s son’s abandoned laptop, containing business emails, compromising photos, and who knows what else.

You may remember how the New York Post, which broke the story, was censored by Twitter leading up to the election, until meeting the condition of deleting their post which shared this story. The link to the article was not able to be shared by other users. Facebook also limited its reach. Meanwhile, NPR condescendingly explained that: “We don’t want to waste our time on stories that are not really stories, and we don’t want to waste the listeners’ and readers’ time on stories that are just pure distractions.” For the most part, other agencies didn’t bother to give an explanation at all.

Among these “distractions” was email evidence that Hunter Biden was collecting donations in exchange for his father’s political goodwill in his time as vice-president. You see, when your father runs the “free world” (such as it is), your opinions and activities become exponentially more valuable, whether as a board member in an industry you have no experience in, or as a painter, or as CEO of an international investment firm you run with other influential government leaders’ sons. Hunter can attest to it. For some reason when you’re the president’s son, no matter what you’re selling wealthy foreign entities are there to snatch it up.

Well, in the past several weeks, the nation’s most prestigious papers (in spite of themselves) have also confirmed the available contents of the laptop as belonging to Hunter, including his emails.

But Hunter’s emails didn’t just provide evidence that he was making money from his dad being hired to keep the country secure and prosperous, but that Joe himself was on the take. Several emails on the computer refer to “The Big Guy” and “JRB” getting a cut. Of course, leading up to the election, FOX – the only network to report any of this – confirmed in interviewing one of Hunter’s associates that the “Big Guy” was then Vice-President Biden.

The question is, as Biden bank accounts have swollen with foreign money, whose best interest is being represented in the White House? Would it not have been nice to have this information before a likely-compromised career politician was elected to the nation’s highest office?

The blame lays largely at the feet of the intelligence community which wanted Trump gone. Fifty-one former officers signed the letter lending the weight of their experience to the baseless claim that it was Russian misinformation, even as the FBI was in possession of the evidence which proved that it was not.

Thankfully, House Judiciary Committee Republicans led by Jim Jordan are looking into who organized this actual, verified misinformation campaign carried out by media, social media, and former government officials. Meanwhile, the FBI is investigating Hunter’s tax filings and presumably is still in possession of the laptop itself. All that remains to be seen is whether or not the results of these investigations will be revealed in such a way that Americans can trust that the powers who organized the initial cover-up, haven’t manipulated the outcome of these as well.