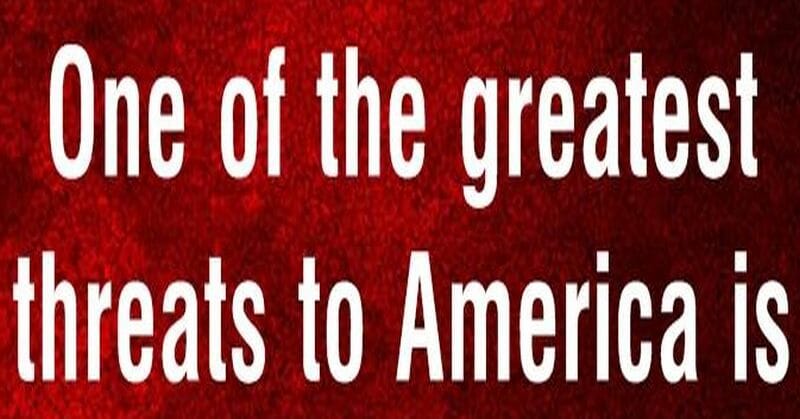 A very important link is given later in this article; don’t miss it!

With news of China’s hypersonic test missile catching the American intelligence community completely off guard; with experts warning that the United States is vulnerable to an electromagnetic pulse (EMP) attack from adversarial countries like China and North Korea, which could render the nation helpless, shutting “down basic components such as military communications, water delivery systems, food, and transport;” and with our own government heightening racial division with Critical Race Theory (CRT), committing human rights violations with January 6, 2020 political prisoners, politicizing science and “health,” attempting to unseat the Constitution as the law of the land, and bring the nation under tyrannical control – all with Marxism/Communism being the end goal; it’s hard to believe that there is an even greater threat to the American people and the American church today. BUT THERE IS!

God warns us that where there is no vision the people perish and that this vision is the law of God (Prov. 29:18). Our Creator has laid out before us the dangers of not teaching the difference between the holy and the profane in Ezekiel 22. Through the prophet Hosea God gives a solemn cause and effect that should leave us ever watchful and taking pleasure in the fear of the Lord. “My people are destroyed for lack of knowledge, because thou hast rejected knowledge, I will also reject thee, that thou shalt be no priest to me: seeing thou hast forgotten the law of thy God, I will also forget thy children.

One may wonder why all the previous statements to simply share my gratitude of Stephen Black and Laura Perry of First Stone Ministries; it’s because of the previous that makes their time spent in West Michigan so important, special, and visionary.

The greatest threat to any people is when Satan asks, “Hath God really said…?” and we begin to question the wisdom of God because it doesn’t match up with the lust of our flesh, the lust of our eyes, or the pride of life. In other words there are those who want to twist the Scripture to match their lives instead of conforming their lives to the Scripture. Having been saved out of homosexuality and transgenderism, Stephen and Laura’s message is all about the transforming power of God to conform our lives to the very Word of God, regardless what sin one is bound by!

It was a blessing to see large numbers come out to hear their message and to be blessed by it. Crowds of young and old alike were blessed by it and moved to ask questions for better understanding according to the Scripture. Whether one was well-steeped in the Word or fairly new to it Stephen shed the light of Scripture upon those questions, dispelling deception and/or laying a foundation for them to build on. Everywhere that Laura spoke the crowds were captivated, blessed, and, as one person said, “hit it outta the park!” Wherever they went, they stayed after the presentation and Q & A until each person’s questions were answered and discussion was finished. They are about ministering to the hurting and shedding light on deception, as true servants of God are apt to do.

With such deception invading and being perpetuated in many church denominations and educational institutions, both public and Christian, it was a blessing to see Stephen used in a capacity that specifically met the needs of these two groups. In addition to the open events, he spoke with, and was well received by, a group of Pastors from various denominations and localities. He also spoke to and did a Q &A with a large group of teens (around 140).

If you were too far outside of West Michigan to attend one of these events or had other commitments which held you back from coming we have a special blessing for you. Here is the important link I told you about at the beginning of this article. Click here to watch Stephen Black and Laura Perry speak truth from God’s Word, share their testimonies, and field a Q & A time with the audience. Don’t miss out on it; share this with your friends, family, and church. Help get the truth out! If you’re looking for more information, go to First Stone Ministries and read from their vast collection of articles that speak heavily on the topic of LGBTQ+ or to buy Stephen or Laura’s book.

Go to www.inhisimage.movie to watch America Family Studios (an arm of American Family Association) film that compassionately and Scripturally deals with the LGBTQ+ lifestyle and includes both Stephen Black and Laura Perry’s story of transformation in Jesus – ALL GLORY TO GOD!